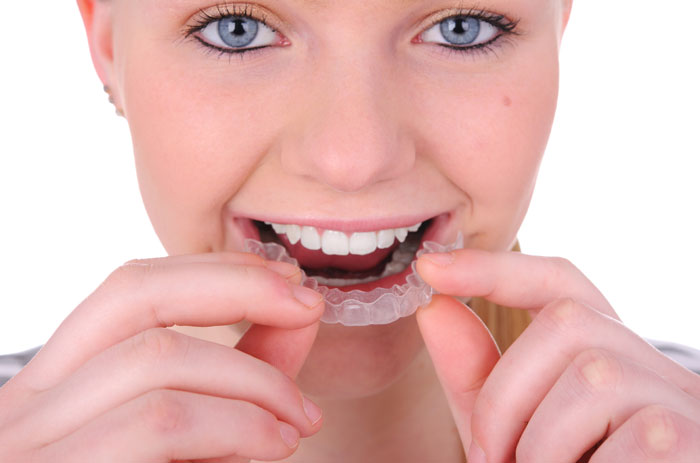 Orthodontics is a common treatment. According to the American Association of Orthodontists (AAO), about four million people in the U.S. are wearing braces or another form of orthodontic device to fix crooked teeth.

Traditional braces have brackets that are attached to each tooth, with an archwire fitted into the bracket slots. Over time, these wires apply pressure on the teeth to move them into proper position.

Compared with the wires and brackets of conventional braces, the hi-tech Invisalign system gives you better access to brush and floss your teeth, which lessens the likelihood of cavities and gum infections.

With traditional braces, it can be difficult to remove food particles that become trapped in the wires. This can lead to a build-up of plaque and eventually tooth decay and gum inflammation. Which requires a more rigorous routine of brushing, because the longer food debris remains trapped in the braces, the greater the risk of other dental problems.

An accumulation of plaque can lead to issues such as tooth decay and bleeding gums caused by gingivitis. While brushing twice a day is the standard guideline, the American Dental Association says that if you wear braces you need to brush after each meal, including snacks.

Not only do Invisalign braces have no bothersome wires, they’re removable, so you can brush and floss your teeth as normal, maintaining a high level of oral hygiene.

The removability of Invisalign appliances also avoids the nutritional problems that can arise because of the wires and brackets in conventional braces.

Maintaining a wholesome diet is particularly important during orthodontic treatment. If your body is healthy, the results of your treatment will be better. A good diet provides essential nutrients for the bones and soft tissues that undergo significant changes during treatment.

If you get traditional braces, they will come with a long list of foods you can’t eat, to avoid damaging them. Cutting out some of these foods – including snacks like hard and sticky chocolate and candy, which can cause tooth decay – will be beneficial. However, you may have to cut out certain foods that are good for you, such as raw vegetables and hard fruits.

If you don’t relish the prospect of a diet based on mashed potato, pasta and peanut butter jelly, Invisalign aligners, being non-fixed, allow you to eat whatever you want.

Other Snags with Wired Braces

The wires of traditional braces can scratch your tongue and chafe it from constant contact. They can also break off and poke into your mouth. Sometimes, braces can irritate the lips. The smooth edges of Invisalign make them comfortable to wear and there’s no risk of wires snapping off.

Traditional braces can cause bad breath (halitosis) when bacteria create unpleasant smells as they feed on bits of food stuck between the wires and your teeth or trapped by a bracket. Habits such as biting nails or chewing pencils can also break the wires of braces.

Braces can also affect your speech, altering the way your tongue moves, as your mouth gets used to them and when your dentist makes adjustments to the appliance as treatment progresses.

Although any orthodontic device can potentially affect the way you talk, Invisalign is unlikely to cause speech impediments. The aligners are made of thin plastic, so any impact they may have on your speech will be temporary and minor although you may notice a slight lisp, which soon disappears.

Because Invisalign braces are made from medical-grade polyurethane resin (clear plastic), they do away with the need for the wires that are essential in the mechanics of traditional braces. Neither do they involve elastics or even brackets.

Advantages of Invisalign aligners over the wires-and-brackets system of conventional braces include:

Invisalign provides far greater control than the wires of old-style braces in how your teeth are moved. Each aligner in the series is worn 22 hours a day for about two weeks. Each progressive movement of the teeth is precisely regulated and timed, with just a few teeth being slightly repositioned – horizontally, vertically and even rotating them – during each stage of the process.

Invisalign clear aligners can be used to treat simple or complex cases and features a proprietary SmartTrack system for more predictable movement of teeth, with results that are easy to see at every stage of the process.

Having no wires and brackets makes Invisalign far more discreet than braces. Many people undergoing orthodontic treatment feel self-conscious about their braces. Invisalign provides a comfortable and convenient solution that allows you to show off your smile without feeling embarrassed.

Cleaning Invisalign aligners is simple. You just take them out, brush with toothpaste and rinse with lukewarm water.

If your teeth need straightening and you don’t like the idea of a mouth full of wires, look for a dentist with Invisalign treatment experience.

DentalROI provides relevant dental content to help providers educate patients. The statements, services, and products referenced in this article have not been evaluated by the Food and Drug Administration, and they are not intended as a substitute for professional medical advice, diagnosis, or treatment. Always seek the advice of your dental provider with any questions or issues you may have. Specific recommendations may vary in different circumstances, so individual consultation is important.